6 Best Kitchen Layouts That Will Make Cooking A Pleasure 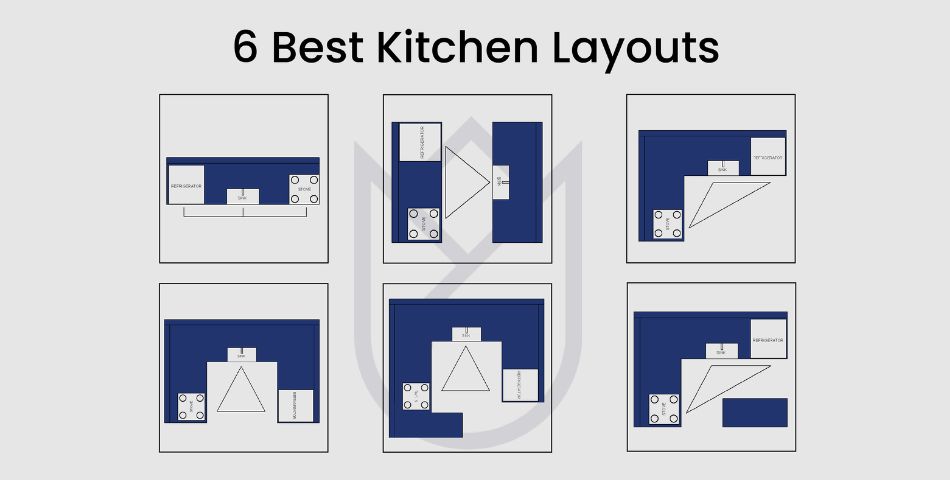 Just like a person cannot live without a heart, a home cannot function without a kitchen. Having a great kitchen layout design just improves the overall functionality and makes the entire cooking process a whole lot easier. However, designing a kitchen isn’t a child’s play; there’s so much that goes into crafting the perfect kitchen. It’s better to leave it to the experts, but to satisfy the curious child in you, these are the best kitchen layouts used by people across the globe.

Here is a list of the best kitchen layouts to make cooking as enjoyable as eating food.

Here’s our top picks for the best kitchen layout ideas for any kitchen.

As the name might suggest, the single wall kitchen layout takes a minimalist approach to designing the kitchen. It’s the simplest version of a kitchen you could have while being extremely organised. This design provides one of the best, if not the best, kitchen work triangles. The work triangle doesn’t intersect with each other, providing better maneuverability and a free flow of work.

All the kitchen services, cabinets, and counters are along the same wall. While it’s a straightforward design, it also makes accessing everything quite easy, which is why it’s the perfect choice for small homes. This idea is further cemented because of the general length of the cabinets and counter top, which is about 8 feet, give or take, perfect for a small kitchen design. The added benefit of this is that it costs a fair bit less than other design layouts.

While this kitchen faces the dining room or the living room, you can always add a mobile kitchen island or carts for more space.

A layout inspired straight from the railway dining cars, the Galley Kitchen layout is a long, narrow aisle with services, and cabinets on both sides. The kitchen layout can sometimes dead-end on one side as per the available space in your house. It is considered one of the most functional kitchen layouts and can easily fit into a small kitchen design that costs a lot less than other layouts.

And since it’s a small layout, it’s also better ergonomically because all the key services are clustered near each other. It also has the added benefit of featuring the best work triangle any kitchen layout has to offer.

The L-shaped kitchen layout is perhaps the most popular kitchen layout, as it presents several benefits for both your kitchen and you. It also sports a sensible work triangle, and its ability to fit into small homes makes it a no-brainer. Moreover, the layout makes the kitchen more accessible due to its multiple entrances.

The L-shaped design doesn’t just fit into corners that are generally abundant in a home; it’s also perfect for homes with an open floor plan. And finally, it provides the luxury of having separate cook tops and sinks.

The U-shaped kitchen is known for featuring built-in cabinetry, counter tops, and appliances on three sides, while the fourth side is always left open. However, in large spaces, the U-shaped kitchens are outfitted with an island counter with a seating area. And as far as small spaces are concerned, a peninsula maybe attached to one side to provide seating.

As the U-shaped kitchen is generally bigger than other layouts, it might cause the kitchen to have some empty spaces. So, you can add some depth to the area by adding hanging pendant lights that will also fill in those empty spaces. Finally, the work triangle featured in this kitchen layout is highly functional and improves productivity.

The layout, besides providing extra storage space, also provides more counter space and can fit into small kitchen designs. If you like this layout, add some modern kitchen appliances from top brands in the world.

The kitchen layout includes a free-standing island counter with cabinets and a seating area. The speciality of this layout is that it can be added to an existing kitchen layout, complementing it. Over the years, the island counter has become an integral part of the kitchen that provides additional space along with extra cabinets.

Which Kitchen Layout Is Best For Your Home?

For small spaces, the best layout would be the Single Wall Kitchen layout and Galley Kitchen layout. If there is still some space left, you can add a kitchen peninsula.

Chances are you will come across a variety of kitchen layout ideas, but you have to consider the space, work triangle, and functionality before choosing one. Hopefully, this blog helped you settle on the best layout for your kitchen. Happy Cooking!

Get A Free Estimation